I woke up by 8 AM for my final day in Nashville. Why is it that I wake up at the crack of 8 AM after being up until 2 AM the night before in Nashville, but sleeping 11 PM to 8 AM in Edmonton is nowhere near enough?

I packed up my bags for check out and got ready for the day. I have grown quite comfortable in this hostel, so typically I just leave whatever I don’t need each day behind, not really worrying about my electronics or anything like that. Today, though, I packed all my important things right into my backpack since I planned to leave my suitcase in the lounge area until I had to leave for my flight in the evening. I got everything together and went downstairs to check out. Before long I was on my way up to Puckett’s Grocery and Restaurant for breakfast.

At this point, I would like to tell you that on this day it was “snowing” in Nashville. Twitter was abuzz with this information. Everyone on the streets was bundled up head to toe. I, however, was unimpressed. Or rather, I was thinking about how much better the weather was than what I am used to. If only this was actually what snowing was like.

I’m sure they have days worse than this, but it is just pretty funny how taken aback everyone was about it. It quite honestly was nothing. I was still wearing my Toms – I didn’t even pull out my boots. It is a bit chilly by Nashville standards though, so I was happy about the jacket I brought along.

Anyways, I got to Puckett’s – just a few blocks away – and ordered an extremely southern breakfast. Yum! 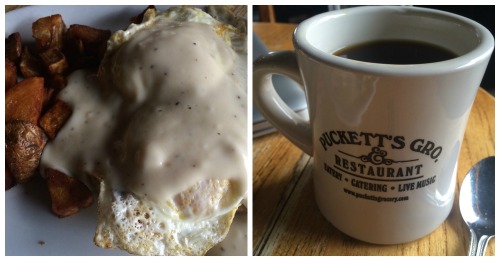 After I was finished eating, I pulled out my laptop and had my coffee topped up and proceeded to prepare a rather embarrassing post for My Fangirl Life. Once that was finished, I packed up and headed over to Broadway to find some live music

I ended up seated at the bar at Rippy’s, listening to a trio on stage with guitars, two girls and one guy. They would take turns playing different songs, happy to take requests. I pulled out my laptop right there at the bar and proceeded to catch up on my blogging of this trip. I snacked on some deep fried pickle spears.

At one point the group on stage asked where everyone was from and I told them I was from Canada. Turns out the guy on stage was as well! When he came around to collect tips a bit later, I put a couple dollars in the bin, and we chatted a little about how much we love Nashville. He said that he wished he could play some Paul Brandt for me, but that he didn’t quite know any well enough. At this point, I remembered that this was on my list of Nashville goals from last time – getting someone on Broadway to play a Paul Brandt song! He asked when I was leaving and was upset when I told him that evening as he said he would’ve learned one. When he went back to the stage he played “Wildflower” by Dean Brody for me instead – at least is was something Canadian!

After a couple hours blogging and soaking up the ambiance at Rippy’s, it was time for the FREE Chris Young concert to start just outside! As I mentioned in a previous post, some sort of Sports Illustrated Swimsuit Edition Fanfest was taking place on Broadway. There was a giant tent set up in the street where they had a variety of different musical acts taking place throughout the couple days of the festival. I had noticed previously that Chris Young was playing at 3:15 on my final day in Nashville and I figured that would be the perfect ending to my perfect trip.

I made my way into the tent and was able to get decently close to the stage. Chris played about a 45 minute set, and man did he sound good. Not a note off-key.

I knew the words to every song he played, and I think he hit everything I could have wanted him to do in that short span of time, including “Gettin’ You Home”, “Voices”, “Lonely Eyes”, “Who I Am With You”, “Aw Naw”, “Sharp Dressed Man”, “You”, “I Can Take It From There”, and “Tomorrow”. I sang along and danced and just fully enjoyed the show. When he did “Lonely Eyes”, I totally flashed back to hearing Patrick Jason Matthews, the guy that wrote that song, play it at the Listening Room Cafe on Monday night. It was a pretty neat, pretty magical moment.

It really does just blow my mind that in Nashville, free concerts by superstars actually do just happen. This isn’t really a thing in Edmonton. But do I ever wish it was! Nashville is a little bit of an event planner’s dream, which I think it why I like it so much. There is always something going on, and there would be plenty of amazing projects to be involved in.

After Chris’s set, it was pretty well time to head over to the airport. I got my stuff from the hostel and attempted to take the bus to the airport, but ended up bailing and getting a cab. At the airport, I realized how very sad I was to leave this amazing city – my favourite city.

In conclusion, Nashville still feels like the place I should be living. In these 4 days I took in so much music, walked the whole city, figured out how to use the bus, made friends with locals, and learned how to go to a bar alone. This makes me really believe I could live there. Perhaps one day I will have the opportunity.

Did you know that Nashville and Edmonton are Sister Cities? Is there some kind of Sister City work exchange program I can take part in? That would make things a whole lot easier.

3 thoughts on “The Perfect Nashville Ending”

Can’t really handle today, but I’m doing it. #Repost @kristingevents with @get_repost ・・・ Life Changes ✨ ••• Today is a hard day, because my roommate/best friend/nonromantic codependent life partner of the last 12 years is moving across the world. I’m not sure what I will do without the daily life recaps, quality time watching terrible Netflix shows, video gaming days, problem solving sessions, wine nights, and the ease of having a partner in just about everything. ••• While my heart is hurting right now, I’m so proud of my girl @kpadget for going after her dream, getting into @cambridgeuniversity for her MBA, and moving on to the biggest and best things she possibly can. I can’t wait to see what those things are. ••• Love you, Kris - and after all… people make long distance relationships work all the time 😉💜
I can’t explain how wonderful this entire trip to Finland has been. I have met so many wonderful people, and made so many amazing memories. Just one day left in Helsinki now before heading back home. These two weeks have both flown by and seemed like forever. I can’t wait to come back to this country someday (hopefully soon!). For more photos from my trip, check out my business Instagram account! Repost @kristingevents: At the Cabin in Pyhtää 🇫🇮 ••• I don’t ever want to forget the way the colours danced on the ocean during sunset, while I was swimming in the Gulf of Finland 💜 ••• Last night I experienced the sauna the real Finnish way, jumping back and forth and back and forth between sauna and ocean. It was absolutely invigorating.
ICYMI, I’m in Finland for a couple weeks, and it’s been a blast so far! I’ll post a bit on my personal account but the best place to follow along is on my business Insta @kristingevents! ✈️💙🇫🇮 Repost: Tervetuloa Suomeen 🇫🇮 ••• Aka “Welcome to Finland” - I’m excited to explore and share my adventures over the next couple weeks as we travel around Finland. We’re staying in hotels, Airbnbs, and with family in multiple locations. Keep your eyes peeled here and on my story to follow along!
Congrats to Jackie and Riley - from ceremony to dance party, yesterday was a beautiful day full of laughter, love, and many tears (but the good kind!) 💜
We had so much fun celebrating Elyse & Mike last night. It was a beautiful wedding for a beautiful couple 💜
This weekend was a stellar combination of slo-pitch, camping, and some of the best people around. Thanks for an awesome time, Mundare! #Repost @kcampbellyeg with @get_repost ・・・ What a weekend! While we came up short in the "B" semi finals, we left feeling like winners. The Fur Traders learned an important lesson in Mundare this year: ball games get in the way of Beer Olympics training. We'll get that keg next year 🍻 #pewpew
Had quite the evening for my last night in Whitehorse... 4 adults vs 1 baby at the hair salon.... but we made it through and momma has a whole new hairdo! #Repost @landonkulych with @get_repost ・・・ Apparently when you have a 4 month old it takes an entire team to get your hair done. Also...who knew there was such a thing as a FOUR HOUR HAIR APPOINTMENT!?!?
Outdoor rink skating is a perfect Sunday activity 👌🏻⛸🌲❄️ #salchow #retiredskater #figureskating #boomerang